Who are you and what do you do now?

My name is Jos Rouw, I’m a lost Zeeuws-Vlaming and I work as a copywriter. At the moment I mainly work for an agency that gives quite personal presentation trainings, and for an agency that makes striking videos. And every now and then I can be found on stage with a story or spoken word.

When were you a Kweek board member?

I started in 2009 as project manager Language & Text, the year after that I stayed as chairman.

What was the main reason for joining Kweek?

On the one hand it was my own curiosity. I went to study Text & Communication because I had found it fascinating all my life, but I didn’t really know what you could do with it in practice. I had 7.5 hours of lectures a week, so it was busy, but I managed to combine it with Kweek.

On the other hand, the confidence of the first board was a big reason for me to join Kweek. I think that Pim, the chairman, realised that I could write copy sooner than I did myself. 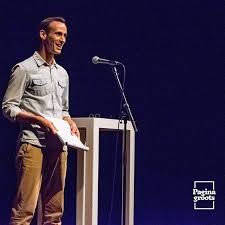 What was your first assignment?

I think it was a project for a company that produces milk powder. They were going to improve their internal communication. This included new screens in the factory – they wanted to know what information to present on those screens. Together with Evy, who had been at university a year longer, I did interviews, wrote an advisory report and designed examples.

What is your best memory of Kweek?

Good question, and difficult at the same time, because there are so many – working with all kinds of talented people, coming up with creative ideas together, doing great work for companies where you would otherwise only have ended up years later. And the dinners of course…

How did you experience your time at Kweek? What did you learn?

I learned a lot. You are 20, 21, 22 and you are sitting in front of an entrepreneur or a manager who wants to see a certain result. You are ambitious but you have never achieved that result before. You learn when you can bluff and how to find your way in the meantime. In the end you manage to get it done with your team. That was cool.

What do you think has changed in the last 10 years?

I wouldn’t know that right away, but what strikes me is what remains the same: that there are always nice, enterprising, creative people working at Kweek.

Where do you hope that Kweek will be in 10 years’ time?

I especially hope that Kweek will still be there – whether in its current form or in another, that doesn’t matter – and offers young and motivated students the opportunity to have a look around in the real world.

How would you describe Kweek in one sentence?

As the most beautiful bridge between theory and practice I know.

Want to explore your opportunities with Kweek? Get in touch!